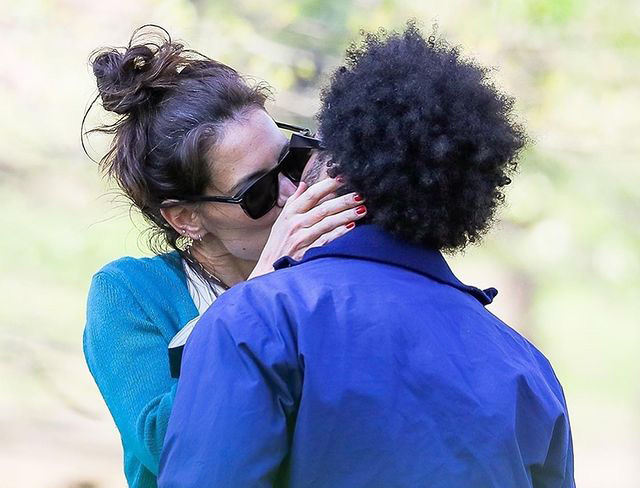 ruise's ex-wife has finally found love again with 33-year-old bassist Bobby Wooten III. The recently blossomed affair is said to be so serious that the 43-year-old actress has already met her mother-in-law…

Katie Holmes’ only public affair remained for years with Tom Cruise, whom she married in 2006, divorced in the summer of 2012 and with whom she had their only daughter Suri, now 16. After that, the actress had a six-year relationship with Jamie Foxx (which only became known in 2017 and ended in 2019).

Then, in September 2020, the chef Emilio Vitolo Jr. entered her life – a story witnessed by many photos that immortalize them between kisses, smiles and languorous looks, yet archived for only eight months. Now, 43-year-old Katie’s heart has started beating again.

For 33-year-old musician Bobby Wooten III, American paparazzi caught the two of them cuddling and kissing during a walk in New York. According to People, which exclusively published the footage, former wife Cruise is said to be so smitten with her new partner that she has already met her mother-in-law. It’s a sign that the two are serious, even though the relationship has only been going on for a short time (it’s said to have blossomed earlier this spring).

Bobby Wooten III is not as famous as his new partner, but he is well known in the music world: He’s a bassist by trade and has played support for many big names in world music, including Jennifer Lopez. And at the last Coachella festival he also performed with Harry Styles’ band. Katie and Bobby are collaborating on Rare Object, the film she is directing, writing the screenplay and starring in. Perhaps that spark happened on that very set.

Holmes’ fans, however, will never forget her love affair with Tom Cruise. After their divorce, the actress and her daughter Suri left Los Angeles and moved to quieter New York. And a “very strong bond” has formed between the two, as an insider revealed to Us Weekly, “It’s not easy to find a mother-daughter pair who are so harmonious with each other.

Dad Tom Cruise, on the other hand, has reportedly been out of Suri’s life for a long time. According to the American press, he hasn’t seen her in a good nine years. Several tabloids claim that it was the Church of Scientology that separated him from Suri. But there is no confirmation. Katie has always said throughout the years that her daughter is the most important thing for her: “Whatever I do is for Suri”. But now it seems that in the life of the actress there is also room for a new love. Judging by the pictures published by People, she is as happy and smiling as ever.