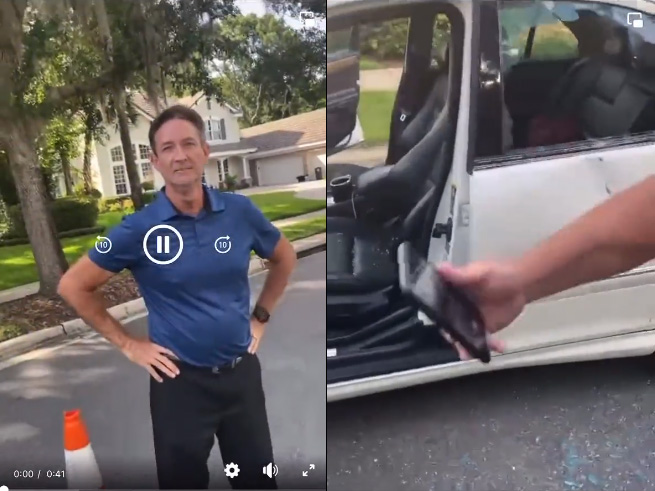 Two angry white men in Florida have been arrested after racially insulting a 16-year-old black teenager and throwing a rock through his car.

Video footage of the teen was first posted on Facebook by his father on June 14.

And the very next day, the teen posted the video on Instagram with the caption explaining how he was “racially profiled” as he drove through “his friend’s neighborhood.”

“They didn’t like the way I was driving so they felt the need to hit my car with a cone and throw a rock through my window. All I wanted to do was de-escalate until the police came because I didn’t want charges to be brought against me for no reason,” his post reads.

His sister also shared the same video on Twitter, writing, among other things: “Thank God he had a different fate. I commend my brother for how he reacted in this situation. They tried to throw a brick at his head and missed”.

In the footage, Donald Corsi and Howard Hughes can be seen berating the young man as he records the horrific damage to his car. Corsi claimed the boy was “burned out and speeding through [his] neighborhood,” and then Hughes can be heard yelling, “Get out of my neighborhood.”

At that moment, a white woman also intervened and told the young man, “Get out of this neighborhood. You don’t belong here.”

The boy’s vehicle was badly damaged. The massive rock they had used to smash the car window in the back seat was covered with glass. And under the smashed window was a visible dent in the rear door, which was covered with scratches.