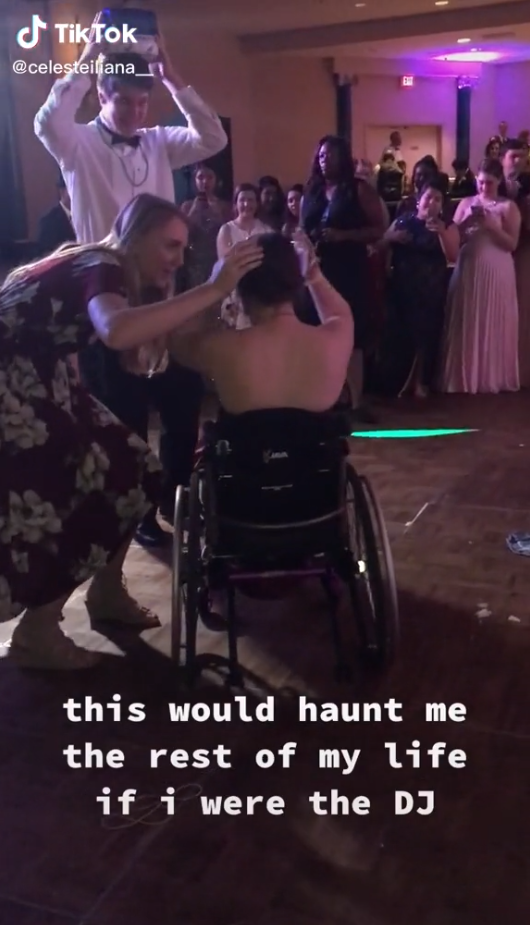 During the incident, which was captured by Celeste Orozco on TikTok, the DJ played the Ed Sheeran hit "Thinking Out Loud" for the prom queen and king's first dance.

It seems on the surface that there wasn’t much wrong with the DJ’s choice, given the popularity of this song. However, the mood in the hall was quickly dampened when everyone remembered the first lyrics of the song.

In the opening lines, Sheeran sings, “When your legs don’t work like they used to.” When those first bars were played and the couple began to dance, a groan and some voices of discontent could clearly be heard from the audience, directed against the dance.

In the text overlay, Celeste wrote, “This would haunt me for the rest of my life if I were a DJ.”

Viewed more than 17 million times, the clip was flooded with comments shocked by the song choice.

One person wrote, the way I immediately thought of “YOU NEED TO LEAVE!”

Another said, I FORGOT THE SONG BEGAN LIKE THIS

A third added, “I would have been so embarrassed I would have just cried and left. I hope that didn’t ruin their night.”

A fourth said, “It’s like the equivalent of the pig blood scene from Carrie.”

Fortunately, Sarah Mendenhall, the actual prom queen, responded to the video to say she wasn’t upset at all. She wrote, “Hey guys, this is me, lol … I thought it was really funny and ironic.

Celeste then replied, “I had a great prom night and laughed a lot about it the next day @sarahmendenhall4.”

All’s well that ends well. We’re just glad she still had a good time despite the unfortunate viral notoriety.