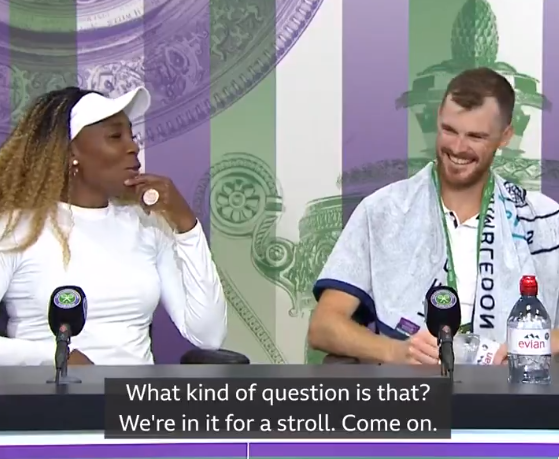 The answer Venus Williams gave to a reporter’s question about why she was playing at Wimbledon this year has caused quite a stir.

On Saturday, they won their first-round match against Michael Venus and Alicja Rosolska 2-1 in sets, but it was the post-match press conference that got everyone talking.

Watching a clip released by BBC Sport, a reporter asked Williams, who has won the women’s singles at Wimbledon five times, if she was “close to winning.”

The older of the Williams sisters didn’t take the question well, responding, “What kind of question is that. We’re going to take a little walk. Come on.”

The reporter didn’t stop there, however, and asked, “Are you here for the question or are you walking all the way?”

Not letting that go either, Williams clapped back, “Are you going to write a good article or just a halfway decent one?”